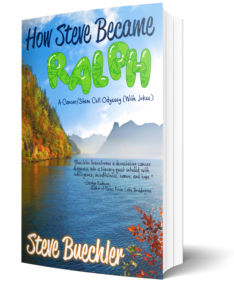 The day after my cancer was diagnosed, I found myself in a hospital for what would prove to be a 37-day stay. By a bizarre coincidence, my wife was hospitalized the next day with a fractured femur that would require weeks of recovery at a transitional care facility. It was an utterly chaotic time, and I initially resorted to writing for the very practical purpose of updating our neighbors on our condition. That writing evolved into a therapeutic exercise for me and ultimately became a book.

Like many people trying to keep friends and family apprised of what is going on, I began to write reports. I included some wit and humor to lighten the impact of my otherwise dire news and demonstrate that I had not lost my sense of humor. I quickly found that one of the great benefits of writing for others was the supportive feedback I received from so many of my correspondents who responded with kind words, timely advice, heartfelt prayers, and good wishes.

These cumulative reports thereby became a kind of cancer memoir consisting of serial, contemporaneous accounts of my treatment and reflections on being a cancer patient. Along the way, I realized that writing for others had become a stimulus for my own self-understanding of what I was experiencing.

I thereby survived this unfamiliar world of hospitals, tests, scans, medications, side-effects, and complications by writing about it. Writing became my therapy. It allowed me to take the chaotic, raw threads of my lived experience and weave them into a coherent, meaningful narrative of what was happening around me and to me.

While I was awash in clinical, technical, medical (and often frightening) depictions of what to expect, it was these intimately personal reflections that sustained me through some harrowing times.

These writings became the basis of How Steve Became Ralph.

My book was honored by being included in the Leukemia & Lymphoma Society’s list of “Suggested Readings” in the categories of “inspiration” and “living with cancer” at https://www.lls.org/support/suggested-reading/books-adult-patients-and-their-caregivers/inspiration and https://www.lls.org/support/suggested-reading/books-adult-patients-and-their-caregivers/living-cancer

For a sneak preview of the book, check out this televised interview:

…Written in the easy style of emails, “How Steve Became Ralph” is an interesting odyssey through a life-saving medical procedure.” …

About those jokes: They are funny because they are really silly, which was probably the point. But Buechler’s correspondents loved them, so he kept them coming….

Right from the whimsical title and subtitle, you get a sense that this is going to be a different type of cancer memoir. And Steve Buechler delivers. Most of the story is based on a series of emails he sent out over about a year-and-a-half, updating friends throughout his leukemia diagnosis, stem cell transplant, and recovery period afterward. This draws the reader into the moment, giving a genuine, real-time view of the experience through the patient’s eyes. It’s a very effective way of capturing the chaotic course of a leukemia/transplant journey, with its crazy jumble of steps forward, backways, and sideways. Read more

Buechler is a good writer, and this book is a fine memoir, not just medical “reportage.” From the first moment of his diagnosis of leukemia until the successful stem cell replacement treatment that results in Steve’s becoming Ralph, Buechler teaches the reader complex medical terms and processes in carefully translated, highly entertaining prose.

Buechler’s training as a sociologist seeps through all the way. One example: it would have to be a sociologist who notices that the only visitors to his hospital room who didn’t return the folding chair to its corner once the bedside visit was completed, were the doctors! There’s a generous helping of humor in the telling of this story. It is a very good read.

Steve (or now Ralph) reminds us, healthy or ill, that life, with all its challenges, is worth living. It shows us the importance of seeing the glass half full rather than half empty, the necessity of setting real priorities in our lives and that keeping an open mind for all the goodness that our journey can offer, even in trying situations, can be ultimately rewarding to ourselves and others around us. It also underscores that patients have a major role in their healing process, which cannot be merely passive. More importantly, love from our family members and our friends, and even from our health care providers (and ourselves) can achieve the best possible results. Good reading to re-set perspectives and to help appreciate and treasure our lives, one day at a time.

A thoughtful encouraging expression of one man’s odyssey beyond a diagnosis of leukemia. This is a courageous plowing-through months of testing and treatment supported by family, friends and health care providers. Punctuated by personal insights and small quips of humor, Steve Buechler delves into his physical, psycho-social and spiritual processes as he works with the health care community and a cord blood transplant. A good read for a health care provider, patient, or caregiver.

Steve Buechler’s How Steve Became Ralph is an unusual cancer memoir as it’s not about death and dying rather about living and thriving. A compelling read!

At its heart, How Steve Became Ralph is the saga of one man’s encounter with acute myeloid leukemia, from a sudden, symptom-free diagnosis to a successful stem cell transplant, with all of the twists & turns and peaks & valleys that he confronts en route.  It is the reader’s good fortune that Steve Buechler is a wonderfully articulate narrator of his own story. His brief essays, initially written to convey the complexities of this disease and its treatment to friends, depict serious, life-threatening matters.  These detailed medical descriptions, however, are leavened by a droll sense of humor and erudite comments on the human condition, resulting in a sobering but ultimately optimistic story, entertainingly told.  The author’s writing craftsmanship and professorial disposition are especially evident in the book’s opening and closing chapters, where he deftly places his personal story within larger frameworks of social, historical, and psychological understanding.  How Steve Became Ralph is a wise, funny, and highly informative memoir, through which Steve and Ralph have much to tell us all.